To add events to this calendar you have to login to gmail with comeniuseuropeanfutures@gmail.com account with password provided during Málaga mobility. 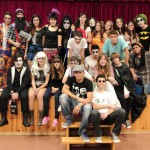 On Monday February 18, 2013 as a part of the Comenius project, our students held a concert, to raise funds to be donated to charity.

Video summary of the concert

Some photos during the CONCERT

On Friday 15th there was a FANCY DRESS PARTY to raise funds.

These are some photos 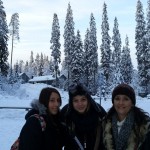 Our students Julián, Nuria, María and Elena, travelled to Tampere, Finland, accompanied by the teachers César and Carmen and tell us their experiences.

My experience in Comenius

My name is Elena, and I am going to talk about my experience in the Comenius proyect in Tampere, Finland.

I have been 6 days in Finland, and I have to say it was a great experience. I enjoyed very much the city and the people I have met there, everybody have been very kind with me.

Thanks to this experience, I have learned many things such as people with different culture, amazing landscapes of Tampere (very different from my city, Malaga) and I have improved my English very much.

I’m looking forward for all the people that are coming in March in Malaga, I am sure it will be a great experience too.

I would describe my trip to Finland as AMAZING. Everything there was fantastic: the school, the people, the teachers. But, I am going to explian it to you in an organised way. The school was really amazing because it was so big and modern. There are a lot of differences between Finish high schools and Spanish high schools, for example: the organisation of timetables is different. In general, they have more free time and more freedom. Something that drew my attention was the fact that breakfast is free for students and teachers. But the best of Finland is people. Finish people are really kind and nice with everyone. Some people say that people from Finalnd are cold, but they are exactly the opposite, they are very close people and they are very helpful.

During this trip I have met other people from different countries such as Italian people, English people … and everyone, no matter their nacionality, were really likeable and friendly. We tavelled with our teachers Mamen and Cesar, who took care of us and treated us so well, they are amazing!. My host family was incredible and suchgood people, so kind and attentive with me. And something that I will never forget is the day we went to a typical Finish sauna and we swam in a frozen lake, it was something new and really extreme.

To sum up, I just can say that this has been a trip that I will never forget and I would describe it as the trip of a lifetime.

Hi! My name is Nuria. I’m one of the eighteen students who have had the opportunity to participate in Comenius project. I’m going to tell you about my experience with Comenius, to encourage you to take part.

I went to Tampere, in Finland. It was such a beautiful place! Finland is very different from Malaga, it has a lot of forests and lakes, and it looks very beautiful covered with snow. It’s true that in finland it’s cold, we had -24º one day! But if you keep yourself warm it’s bearable, Im colder here in Malaga than there.

On the first day we were very tired but when we arrived in Tampere and we saw the snow all the tiredness disappeared and we became so excited. Until I touched the snow I couldn’t believe that I was there.

When we left the airport I went to the school and I went with my host, Linnea, to her lessons. She had dance class, so it was very good fun. In the evening I met the family and they were very pleasant.

Their school was amazing; in the classes there wasn’t so many people as in Malaga, they had a lot of material in their library, in their art class, in their music class ( even more than 3 pianos and a drum set!) … and they had areas where they can rest with sofas, tables and computers in the corridors, but the most atonishing thing for me was that they left their bags and coats in the corridors.

The next days, we were all together in the mornings. We had some lectures and we worked on the different educational systems. We also went for a walk to visit a tower near the school. From the top of the tower there was a beautiful view. On other day we went to the Kuru school of foresty, we went for a walk and we took photos in a big area full of snow. It was very beautiful!

In the evenings we also had a great time, we went ice skating, sledging, shopping and on the coldest day we went to the sauna and ice swimming! Outside the temperature was so cold that when we went outside our hair froze, but it was very good fun!!

On the last day until the other comenius students left, we went to some museums in the morning and in the evening I went with elena and some guys to buy souvenirs and to sledge. It was snowing and the snow went into our eyes. Later, we went to the school and we had a farewell party; we ate, sang and danced and we played a game about zombies who run after humans to turn them into zombies. We had a great time but it was also a little sad because we had to say goodbay to each other.

On sunday I spent the morning with the family. Linnea, her brother and I went to a hill to do sledging and it was great, but I fell off the sledge many times! In the evening we met the other people at ‘Megazone’ and we played laser tag. It was awesome!!

On monday morning we had to leave, but I didn’t want to go. Maybe I didn’t talk a lot with the other students, but I have met so many very nice and amusing people who I’ll never forget, and I had a superb time there! I’ll never forget this trip, I hope to go there again and see all of them!

First of all, thanks to all those people who have made this incredible experience possible.

I never thought to participate in a project like this, and travel to a different country. Finland is fantastic, and people are kind and very friendly. And the landscape is amazing, very different from Spain. I had never seen so much snow in my life!

When I arrived at the airport, my friends and I were so nervous. At first, speaking English was very difficult and it was harder to understand. So I had to strive and try to speak English better and more often with the others. And finally, I finished thinking in English, and talk in Spanish with my parents was strange.

With respect to the activities, I think they were perfect. The best, no doubt, was the party. Everybody dancing, singing, laughing… and obviously, taking photos to remember that moment. But the worst part was when we had to leave and say goodbye to everybody, we cry a lot and it was impossible for me to separate from them. I want to return!

I would like to stay more days in Tampere but those few days have been unforgettable. Thanks a lot to make me the happier person of the world! 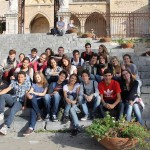 Our teachers Lola Garrido and Ana Bernal travelled to Palermo with Livia, Ricardo y Miguel as the second mobility of our Comenius project.

The students themselves describe their experiences

We arrived to Palermo at 9 o’clock, when we were in the plane we were very nervous, but very happy.

When I arrived to Francesco’s house I had dinner and I talked with Francesco’s family about football, and Malaga.

I went to the high-school and we did a PowerPoint, we spoke English with the people, and we worked with the students.

We went to Cefalu, a village with a beautiful beach, and in the beach we played football and we took photos.

I haven’t words to describe this trip, because I was laughing all the day. Now, I have new friends in different countries and I have visited a new city: Palermo. I hope to return the next summer.

Livia has published her experience in her blog. Please, click here to see it.

We spent the first day flying,and when we arrived Palermo I went to Giovanni’s house by car. He lived in a small village at 24km from Palermo.
Next day we went to the nhigh school by bus and we worked together, Spanish, Italians, Germans..
This evening we went for a walk in Palermo’s city center. In the night we went to Riccardo Botta’s house and we had a very very good time, we were talking, playing games and Riccardo Botta played the piano.
Third day we went to school and in the evening we went to Palermo’s PASEO MARITIMO and we stayed in some grass of a park next to the sea, we were playing football. This night we went to Irene’s house and we were talking, eating and singing.
Fourth day we went to Cefalú and we were on the beach for hours, we played volleyball and four boys, including me, swam in the sea. In the night we went to Palermo’s city center and go for a walk.
Fifth day we woke up and we went for a walk in Piana, after, we go to the airport and we come back to Málaga.

This trip have been my best trip yer. We have a good time there, it was to funny and a really good experience for us. Meeting people from other countries is amazing, I think I can’t forget this trip. We did lots of friends there, we want to come back this summer 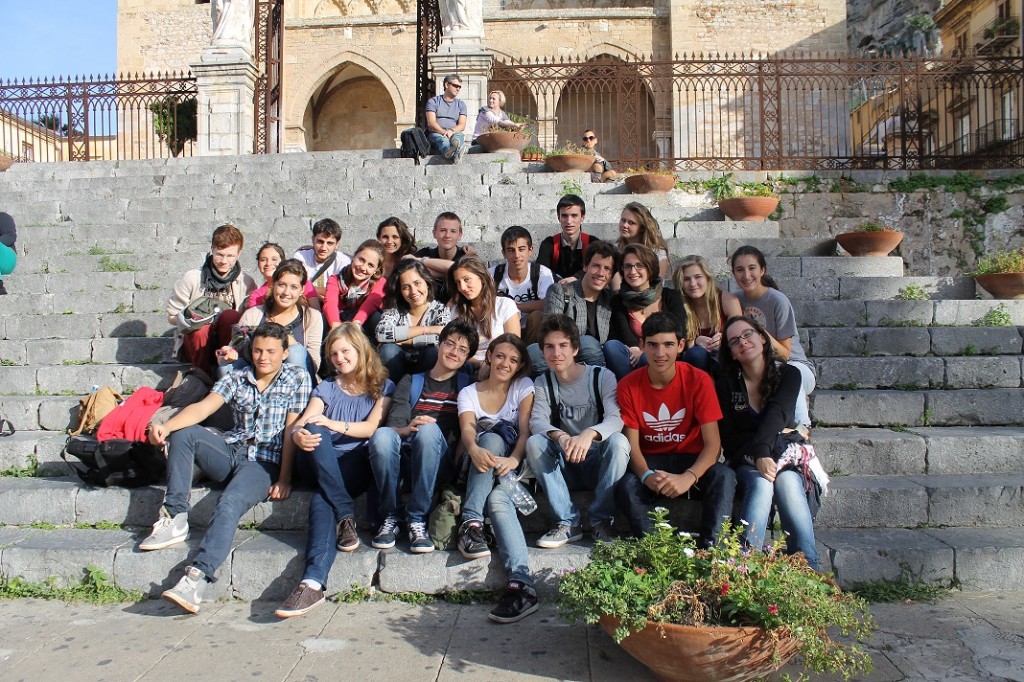 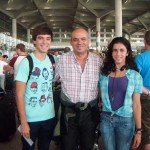 The first stage of our Comenius project “Young People, European Futures” was for planning details of the rest of the project. Our teacher Emilio and two of our students: Alfonso González and Lucía Auñón assisted to Stratford-Upon-Avon High School. Three of them came back very satisfied of the visit. Here you have a summary writen by Lucía and Alfonso.

What is Comenius?
Comenius is a project organized by several European countries which main aim is to communicate students from several cities from Europe. Specifically, our project involves collecting information about job opportunities for young people. That information will be uploaded in “eTwinning”, the social platform we will use to keep in contact with the rest of European high schools.
When we were in Stratford we had to plan, with the rest of Comenius students, the activity we would do when they came to Spain. The first activity will be an orienteering event and then we will play some games at the beach.
Working with them was the best part of the project, because now we have many foreign friends and we have improved our English.
Personal experience
We have enjoyed it a lot, and we would repeat if we could. We were surrounded by English people, and we couldn’t speak Spanish, this made us feel amazed.
The most important value we have achieved is to get by ourselves in a totally different atmosphere, where we were almost alone.
Pur host families were very welcoming, and we felt as if we were in our homes. We visited the city of Stratford and some surrounding villages, like Bourton-on-the-Water. 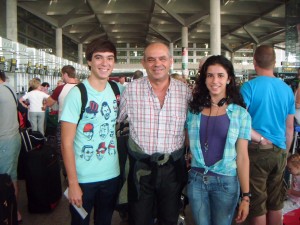 This website aims to document the International Exchange and inform a wide range of audiences of the Educational, Cultural and Employment opportunities available across Europe. 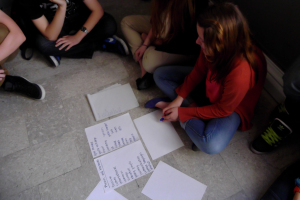